There are some things that I always seem to be in the mood for. Some good examples would be science, burritos, Pearl Jam, Penn and Teller (speaking of Penn and Teller, you NEED to see Penn and Teller: Fool Me...AWESOME!!! I've seen them live and they are the best!!!). My interests (other than these) seem to go through phases. Here's a list of what I am digging right now.

The Bad Plus A modern jazz trio whose music has elements of rock and pop included. Their latest album is called "Never Stop" and is the first with all original compositions (previous albums contained several covers, including "Smells Like Teen Spirit" by Nirvana). You may not be into jazz, but you should give them a listen. They are all I have been listening to lately.

Death From The Skies by Phil Plait "The Bad Astronomer" The subtitle of this book pretty much sums it up..."The science behind the end of the world..." Each chapter describes a different way in which the Earth could be destroyed, or at least harmed significantly. This may seem kind of gloomy, but as I mentioned in a previous post, I enjoy the idea that we are insignificant compared to the universe. The book does a good job of illustrating just how dangerous a place that universe really is.

An Idiot Abroad on The Science Channel Produced by Ricky Gervais, the show follows a British guy named Karl as he is sent around the globe to see the seven man-made "Wonders of the World". The trick is that Karl is not interested in seeing them, or in leaving England for that matter. He also seems to have no filter between his brain and his mouth. He says some of the most awful things, but it doesn't seem malicious when he says them. I think it just serves to highlight his myopic world view (it's also hysterical). You can see new episodes on Saturday nights at 10 PM. I'm hoping The Science Channel really benefits from a show like this bringing in new viewers. A little more science is good for everybody.

That's it. I wish I could include Washington Capitals hockey in this list. The truth is I'm always into Caps hockey, they just frustrate the hell out of me. Oh well, until next time...
Posted by Joe at 1:32 PM No comments:

I read in Psychology Today that laughter is a "speaking in tongues" in which we're moved by an unconscious response to social and linguistic cues. They go further to say that this is why people often say that they "can't laugh on command" (note that I didn't say "can't laugh on cue", because then my second sentence would have been in contradiction with my first...a surefire way to weed out the already small group of people who read my drivel).
In my first ever post on this blog, I made mention of Buffalo Bills wide receiver Steve Johnson and how he blamed God for dropping a crucial pass in a game. As great as I thought that was, I forgot about it rather quickly. Until I saw this video.....

I had an unconscious response to this for sure, as well as the rest of Mr. Deity's videos. If you had a similar response, check out more of his videos here. By the way, the blonde in the green sweater plays a character named Lucy (short for Lucifer). I wonder what it says about me that I had a strong response to her too (she's HOT!!!..which is also funny..heat/hell, get it).
I have actually found quite a few pieces of "secular" humor this week. The following pictures are two of my new favorites: 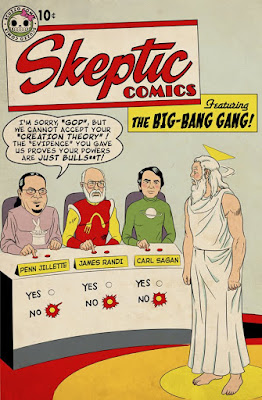 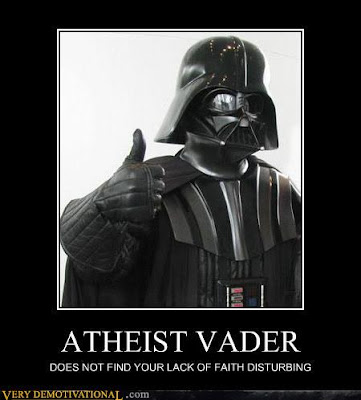 On a serious note, my hero, Charles Darwin, and my fathers hero, Abraham Lincoln, share a birthday. That birthday is February 12, 1809 (isn't that crazy..exact same day) and they would have both been 202 yesterday. My father just had a heart attack last week (he's doing great, thanks) and I went to visit with him yesterday and we talked about Lincoln for awhile. Good stuff.
Well, that's all I got for now. I have been having some interesting conversations lately that are eventually going to lead to a lengthy post about science, biblical literalism and absolutes (the conversation started out being about Egypt and freedom...completely nutty). Today is not that day. I have a lot of reading to do (currently reading Death from the Skies, by Phil Plait aka the Bad Astronomer...you have to read this book!!!). 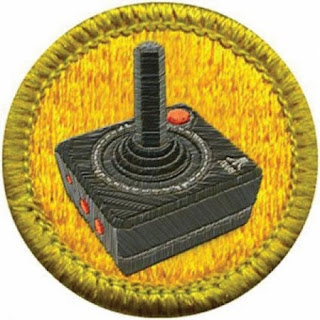 I was a Cub Scout in fifth grade. I liked the outdoor activities and the social interaction with other kids outside of the school setting. We met in the basement of a local church once a week. About that same time, something happened that changed me forever.
I had begun to question the existence of a "God" sometime around third or fourth grade. It was through private conversation (and by that I mean, talking to myself) that in the fifth grade, I came to the conclusion that his or her existence seemed unlikely to me. It was my "big secret". I had never shared my feelings with anyone else. Everyone talked about and seemed to believe in God, so I was uncertain how other people would react to my opinion. I began making small, private (or so I thought) demonstrations of my lack of faith. The most significant was omitting the word "God" each morning in school when we recited the Pledge of Allegiance. My display did not go unnoticed. As each day passed I got a little more animated in my rebellion, and I guess it became very noticeable that I was not saying it. The teacher told the principal, who in turn called my parents to report this "very disturbing" turn of events (I am going to keep the names of these people out of this, I hold no grudge against them...I'm actually grateful). My parents, of course, defended my right not to say it, though I think it may have upset my mother (a lifelong Christian). It seemed so strange to me (at the time) that I could create such a racket by the simple act of NOT saying a word. It seemed like they were saying "It's okay (kind of) to believe what you want, but you better keep it to yourself".
I then starting thinking about the Cub Scout Oath that I recited at each meeting with my friends. You know, this:
I, (your name here), promise
to do my best
to do my duty to God
and my country
to help other people, and
to obey the law of the pack.
From the time I started going to Cub Scouts, I had been mouthing the word "God" from this oath. I mean, if you don't say it, you're can't be a Cub Scout, right? Obviously, I didn't belong here. I stopped going. I remember telling my friends that I wasn't going to be able to continue with Scouts because it conflicted with my new Karate class (a lie, and the first of many that I would make trying to hide my atheism).
Today is the 101st anniversary of the Boy Scouts of America, an organization that openly excludes atheists and homosexual boys and scout leaders. As a private organization, this is their right, and no one will argue more for that right than me. I also would argue that they should not receive any public money or "special deals" on the use of public land BECAUSE of this. It's a shame that they have not attempted to evolve along with the rest of society (its also a shame that they don't offer an Evolution Merit Badge). Boy Scout membership is down 11% in the past decade and Cub Scouts membership is down 23%. Camping and outdoor education is a great part of growing up, and could be a nice counter to the video game culture that we live in (I have nothing against games, but you need some fresh air every once in a while). But as my son very appropriately put it (he too attended a Cub Scout meeting..he quit after the first one), "What does God have to do with camping and knot tying?"
I now talk openly with others about my atheism (obviously, you're reading this). I know some people judge me because of it, and that's okay. But I don't feel I have to HIDE it anymore. The experiences I had in fifth grade did nothing to help me get here. And that is BS!!!
P.S. - I use parentheses a lot!!! I'm not a writer, it's my other BIG SECRET!!!
Posted by Joe at 1:39 PM No comments: 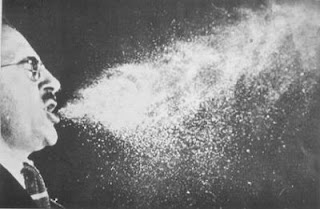 I have been on a search for a long time. Not for meaning in my life, I have that. Not for what came before the big bang, I'm not smart enough for that. No...my search has been for what to say in the awkward moments after someone sneezes. For awhile now, I have been looking for an appropriate comment to make to someone who sneezes. They usually stare at me, waiting for the words "bless you" to come out of my mouth. I can't say that. When you disagree with such a large portion of the people around you, weird situations like this come up a lot. It is hypocrisy for me to say "bless you" (it does happen occasionally and because of that, I am occasionally guilty of this hypocrisy...you caught me)
Long ago, people believed that when you sneezed, your soul exited your body. They began blessing one another, hoping that God would protect them from the evil spirits that may enter their bodies and takeover. We now know that sneezing is an involuntary act that rids your nasal passage of germs and particulate. So I usually go through this whole spiel every time someone sneezes in front of me for the first time. "Your body is functioning properly", "you don't need any blessing", etc, etc.... SO finally, the other day, while explaining why I don't give the customary response to this act, it hit me like a ton of bricks. I now know exactly what to say. And here it is: Congratulations on expelling your particulate (catchy huh?).
I informed my wife that I had finally figured out what to say, and she seemed excited to hear what I had come up with (pity her please, our conversations are very strange...not at all her fault). When I said to her "congratulations on expelling your particulate", she stared at me, and for just a moment I was convinced that she was asking herself, "why?". "Why did I marry this idiot?" I don't blame her. But she couldn't help herself from laughing the next morning when she sneezed and I tried out my new response for the first time (in context). I was happy to make her smile, but even more happy that my search is finally over.
CONGRATULATIONS ON EXPELLING YOUR PARTICULATE!!!!
Posted by Joe at 7:27 PM No comments: