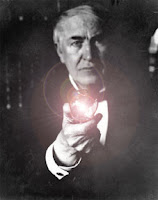 I am writing this having made the assumption that you have heard of Earth Hour. If you haven't, go here. (Somehow or another I didn't post this last weekend when I meant to). I am not big on events that only "raise awareness". I don't know exactly what that means. I can understand events that raise money. I wonder if there is anyone who has not heard of climate change at this point? There are millions of people on the planet who don't have access to lights that they can turn off. For them, Earth Hour is "Every Hour"...and they aren't necessarily celebrating because of it. Playing around for an hour or a day in the dark is not going to solve any "energy crisis" we may have. We will solve our energy issues by developing new technology. And that is not done in caves or in the dark.

So here's the deal. If you are concerned about energy consumption, buy a hybrid car or "green" lightbulbs. (I am not endorsing either of these by the way, just citing examples). The best way to make change is through the market. If enough people start buying these items, companies will make more of them. Additionally, if you really care about helping people in Japan, make a donation. You can do so here or here. A LOT of people in Japan are PARTICIPATING in Earth Hour, but they sure aren't celebrating it. Praying might make YOU feel good, but it does nothing for people who have lost their homes and love ones. Just sayin'.
Posted by Joe at 4:17 PM No comments:

I haven't posted in a little over a month, mostly because I haven't had anything intelligent to say (after reading this, you may conclude that I still don't). I have been thinking a lot lately about labels and their meanings. Three in particular; atheist, theist and agnostic. It seems in many circles (particularly ones I travel in), agnostic is viewed as a middle ground between believers and heathens (my team). The feeling is that those who call themselves agnostic have a more reasonable position than atheists and theists. This (quite frankly) is BULLSHIT!!!

Agnostic/gnostic and atheist/theist are answers to two completely different questions. The terms "agnostic" and "gnostic" comes from the Greek word "gnosis" which means knowledge. So when you ask someone whether they KNOW whether there is a God or an Easter Bunny, (etc.), they either know or they don't. If they say that they don't know (the only reasonable answer to that question by the way) they are an agnostic. It is an epistemological question. "What do we KNOW about the universe?"

Atheist or theist is an answer to the theological question, "Do you BELIEVE in god?" It is not about knowledge, but rather the best answer that you can come up with after you have reviewed all the evidence available to you (voices inside your head are not evidence by the way...you may choose to believe because you "hear" them, but they are not evidence). I have seen NO evidence that a god or higher power exists. It seems to me that the only "evidence" that such beings exist are ancient texts written by humans. For theists, that is enough. For atheists, it is not.

There are theists who choose to believe that the complexity of the universe dictates that it have a "designer" or creator. This too is a belief, as they have no knowledge of such a creator. It seems to me a very arrogant position to take actually. "I can't understand how the universe could have come into existence without a designer, and I am extremely intelligent so therefore, there MUST me a god." My apologies for being redundant but...BULLSHIT. By this same logic, wouldn't this designer need a designer? (Yea..now what?) We learn more and more about the universe every day, and with each question we answer, several more questions get asked. It's okay, we may get there one day. We may not. But we shouldn't just throw up our hands and claim KNOWLEDGE that we don't have, just because we can't conceive of an alternative.

I have no problem acknowledging the possibility (however slim) that there may be a god. I can't disprove his/her/? existence. I don't need to. I am not the one claiming to have special knowledge. That is the burden for the other side. And no one has PROVED it. It's a belief and nothing more. A belief that provides comfort to many, but one that is no more TRUE than a belief in Santa Claus. I'm not claiming that this belief is WRONG. Only that it doesn't deserve special treatment and it certainly shouldn't be called science (it's FAITH, if it's yours, be proud and call it such). My position is simply a lack of belief. I'm not claiming knowledge of the non-existence of a deity. Just that I've never seen one, so I have no reason to believe there is one. And I choose to find comfort in my friends and family, and for me that's enough. Because it's all I've got (and all that I need).

So the next time an agnostic claims to have the only reasonable position, call them out on it. They are not answering the same question.
Posted by Joe at 10:35 PM 1 comment: