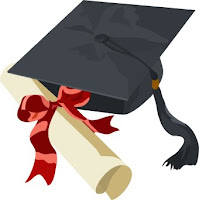 My son, Jeffery, "graduated" from fifth grade yesterday. I don't remember having a "graduation" ceremony when I was socially promoted to sixth grade, but it may have happened. At first I thought it was kind of a silly idea, but anything that allows me to dote on my son a little more is cool with me. While I was sitting in the crowd watching, two things happened that really struck me and I thought I would write about them here (you know, because everyone gets a random thought in their head and runs write to the internet to "blog" about it...I'm an arrogant pig).

First, when I was in fifth grade I stopped saying "god" in the Pledge of Allegiance. It caught the attention of the teacher, who promptly sent me to the office and my parents were called in. I've covered this in a previous entry. I've NEVER told Jeffery this story. But yesterday during the Pledge, I watched him take his hand from his heart and place it over his mouth during the "under god" part. WOW!!! I mean, I know I'm his co-creator, but I thought that only meant he had a 50/50 shot of turning out fat and ugly. I was surprised, not only that he did it, but that he did it with much more style and "grace" than I did. I started getting real animated after a few days of not saying the word, trying to draw attention to myself. Not him. It wasn't a cry for attention, just a private statement he was making...it was perfect. We talk about religion and science and he knows how I feel about them, but I've always told him that he should form his own opinions as he gets older. Looks like maybe that time is now.

The other thing that really got me was a fellow classmate of his. One student from each class got up to give a short, prepared remark about their time at the school. One of the students (I don't remember her name...and even if I did I wouldn't post it here) was a young girl from a Muslim family. She gave a nice speech about how she had struggled with math and the teachers had helped her improve. She also mentioned that she wanted to be a doctor when she got older. All of these things were said with her hair uncovered and styled. She was also wearing a leopard print dress that came down to about her knee. The freedom that she has here to wear clothes that she likes and to dream of becoming whatever she wants (freedoms she may not be able to have in the Middle East)...that's something for all of us to celebrate. I so often ramble on about the lack of freedom that we have in our country (think drug war, gay marriage, etc...IT STILL CAN GET BETTER), but it was nice to be reminded that, in so many important ways, we really are a free nation.

That's it...all I got. My kid is heading to middle school...I'm getting older (and fatter). I am contemplating a return to volleyball to get myself back into shape. More on that in another post. Congratulations Jeffery!!! Your dad loves you, more than you know.
Posted by Joe at 12:19 PM No comments:

The only news you get right now is about Congressman Anthony Weiner's sexting scandal. It's a funny story, no doubt, but I don't care about him flirting electronically with women (it's not even real sex dammit!!!). I guess I feel bad for his wife and it may be important to discover whether or not any of the recipients of his "crotch shots" were minors, but it doesn't change my view of him as a politician. I don't even care about him lying about it to cover it up. It's his personal life, not a political issue (I do think him mentioning Al Queda when he was still going with the "I was hacked" story is a political issue though, and that deserves scrutiny). But there are many other reasons to throw criticism at Congressman Weiner.

For example, Weiner was one of the biggest supporters of Obamacare. Check this video of him basically telling Democrats to be more public in their support of the bill.

I must say, it's funny now to hear him use phrases like "hiding under our desk" and "elephant in the room" (you know that old gag where you pull your hip pockets out, unzip your fly and then pull...well, you get the idea). But after all of that support, he sought a waiver from the bill for his constituents in New York. He wants to see if the city can save money and have more control over it's own destiny. HIGH COST AND LIMITED CHOICE WERE PART OF THE OPPOSITION TO OBAMACARE!!! Weiner has a 100% rating from the AFL-CIO for his "pro-union" voting record in 2010 (he also has a 96% lifetime rating). I think I've covered my thoughts on unions before. His commitment to "green issues" is also a concern for many who realize that Global Warming, while real, is not the biggest issue that the world faces (and also one that we can't just throw fists full of money at with no good results). I could go on, but you get the "picture" (you see what I did there).

If what matters to us about politicians is there personal life, then guys like Weiner and Arnold Schwarzenegger should be a dream for us (don't forget, Billy Clinton also). I think something else matters. An elected official tweeting a picture of his junk is a great bit on a late night talk show. But Weiner's real problem is his policies...not that he's a pervert. He's a big government idiot with Socialist leanings (it's why he got elected in New York). We need to drop all the puritanical crap and go after politicians for their bad political ideas, not their bad personal judgement. Weiner has plenty of both, but only one matters to me.
Posted by Joe at 8:03 AM No comments:

Some thoughts are running through my head now that I've returned home from seeing X-Men: First Class. The first thought is that you NEED to see this film. Matthew Vaughn is the director and he does an awesome job (he was also the director on Kick-Ass...another great "superhero" film). The story is tight, the special effects are superb and all the actors are great. I'm not going to do a full scale review of the movie (I tried that with Ghostbusters and I think I failed miserably), but I do want to talk about the X-Men briefly.

Products of the "next phase" of human evolution, the main characters in the X-Men all have "special" or "enhanced" abilities due to random genetic mutation, the same process by which humans have evolved over MANY MANY years (and by "MANY MANY" I mean decidedly more than six thousand). They have the ability to read minds or manipulate metal with their thoughts (each character is unique...hey, maybe they aren't that different). But they are seen as outcasts. The people who run society (mostly politicians) are scared of these "unique" individuals, and they concoct things like "Mutant Identification Programs" or even try to kill the mutants off (this may or may not be part of the story line in X-Men: First Class...I'll never tell). Nothing scares people in power more than individuality. And if you've been exposed to any of the comics or movies you know that not all of the mutants respond to these threats the same way.

But even as a fan of comic books, I don't think I've been exposed to them enough!!! The themes covered in the stories (racism, diversity, antisemitism, religion, LGBT, etc.) are important and worth thinking about more. The message I take from the X-Men is this: We are ALL different and we each have our own quirks and "weirdness", but that doesn't make any of us better or worse than anyone else...just different. It also doesn't make one group right or one group wrong (this was written about much more eloquently by Nick Gillespie and Matt Welch this weekend in the L.A. Times, check it out here). But don't take my word for it, or anybody else's for that matter. Check them out yourself. You certainly don't need me to interpret them for you (there's nothing more insulting then someone telling you how to interpret a story...you don't need to go to a big fancy building and put money into a plate to have them explained to you). The best art teaches us about life, and I think the X-Men do that in a fun and amazing way. And while I've always been a casual fan, I don't think that I have given them the attention that I should (I mean, comic book characters whose powers arise from genetic mutation?!?...what have I been doing all this time?). This doesn't mean that the guy who wields that green ring won't be my favorite comic book character anymore. It just means I'm gonna get a little deeper into the world of Professor X and Magneto. MAN, that seems like a good thing!!!
Posted by Joe at 3:54 PM No comments: