The Royal Road to a New Hobby 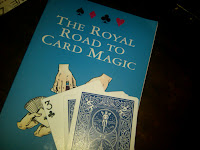 Over the last few months, I have done nothing besides work, and then come home...and work on my book. I mentioned in a previous post that writing a book was harder than I realized, and I think that's partially because I am trying to force myself to finish it as fast as possible. Where's the fire!!! The book will get done. I don't need to rush it. It seems that hurrying through is a bad idea (I'm not that good a writer to begin with). So I'm gonna slow down a bit. Spend a little more time with my wife and son. And...I've decided to pick up a hobby.

I'm trying to learn card magic. I don't have any objective other than learning something new that I currently have no clue how to do. I've been a fan of magic for some time now, and I want to give it a shot. Yesterday, I went to the local magic shop and met a really cool guy named Dennis Haney (he owns the shop). I told him I was just starting out and was looking to buy a few decks of cards. He started to suggest that I pick up "The Royal Road to Card Magic", just as I began telling him that I've had the book for years...but never bothered to open it. I told him that Penn had suggested the book online, and he told me how Penn tells everyone to pick that book up...and they never do. He was extremely kind and offered to help me out and give some pointers if I was interested. I'm going to take him up on this offer. Way too often I jump into something like a ball of fire, and wind up missing some important stuff along the way (you should notice a pattern here...see paragraph one).

You see, the last time I tried to learn a new hobby, I grabbed a guitar. I was so excited to get started. My father is a good guitar player and several of my friends were really good guitar players, so I wanted to jump right in and start playing songs. I learned the basic chord shapes and went online to find tablature (a cheat for people who can't read music) of songs that I liked and was playing pretty quickly. But it was all too fast. I don't know any scales and as I already hinted, I have no clue how to read music. I wanted to be able to play songs right away. As a result, I am a guy who can strum chords to several songs and sing along (poorly) while playing...and that's about it. Basically, I'm a candidate for "front man" in a Toby Keith cover band. I don't want to rush through this time. With the card magic, or the book.

So...today I begin. It's all day working on the overhand shuffle (and probably several days after that). Hopefully, I've learned my lesson. I'm a "married with kid" guy who is inching closer to forty years old every day. It's about time I start learning some lessons.

I'll leave you with a creepy video starring the aforementioned Denny Haney (created by his daughter...and filmed in the Baltimore location of his magic shop).