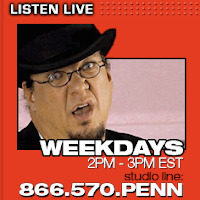 I loved Penn Jillette's radio show. It was easily my favorite hour of each and every work day. Of course, it was during a time when I drove a frozen food delivery truck for 12-14 hours a day, but I'm not damning with faint praise here. It was a wonderful show and I miss it. I miss it so much, that I listen to an episode each morning (via podcast) during my 3-4 mile walk. It's like using a time machine to travel back and "re enjoy" your favorite thing (I realize that DVD's and CD's and plenty of other media do this also, but we can talk about them another time).
This morning's episode was from March 20, 2006 and the two "big topics" were Patriotism and Patents (Penn would often start out with a main topic or two, but the show was free-form and the discussion would often go in many nutty directions). At one point the conversation between Penn and Michael Goudeau (co-host and juggler extraordinaire) drifted to Space Shuttle launches. It is then that Penn gives credit to NASA for discovering the mathematical equation for comedic timing. This equation for comedic timing is "the difference between the speed of light and the speed of sound over a distance of 3.7 miles." I had completely forgotten this and it was great to hear it again. Penn wrote in more detail about this in he and Teller's 1997 book, "How to Play in Traffic". The excerpt (it's long, but worth reading) can be found here. Penn and Teller also covered this on an episode of their Showtime show, Penn & Teller's Bullshit! Here's a clip...

The Penn Radio show exposed me to so many great things that I didn't know about. Norman Borlaug, Bob Dylan's "Up to Me", the amazing jazz piano playing of Mike Jones (who I got to see perform before the P&T live show in Vegas), Paul Provenza and The Aristocrats movie, and of course, Monkey Tuesday and "Bacon and a Kiss" airlines (if you weren't a listener...you won't understand). But it was more than that. Hearing Penn and Goudeau talk openly about being atheists was everything to me. I didn't know any other atheists in "real life". I had only told my parents and a few close friends that I was an atheist. After I found that show, I was able to tell everybody...because I no longer felt I was the only one. The episodes of Penn's radio show can be found on iTunes here. Give it a try...it is my ALL TIME favorite bit of entertainment.
Posted by Joe at 2:47 PM