"Today will be a day long remembered..." 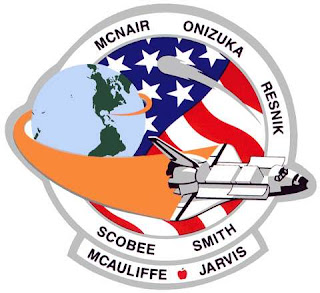 Throughout history there have been many "unforgettable days" that have stuck in the memories of those living at the time. Unfortunately, they are usually tragedies. My mother remembers exactly where she was the day that President Kennedy was assassinated. I'm sure many of you remember, as I do, exactly where you were when the planes flew in to the World Trade Center on September 11th. But even though 9/11 is more recent and involved the loss of MANY more lives, the day that most sticks in my mind is January 28th, 1986, the day the Space Shuttle Challenger disintegrated (it wasn't an explosion) shortly after take off.
Maybe it's an age thing. I was in Industrial Arts class at Southampton Middle School (eleven years old). They announced the news over the loudspeaker to the entire school. My goofy little friends and I talked in the cafeteria about how the Russians must have blown it up (remember the Cold War anyone?). When I got home that day, I turned on the news. There wasn't the same amount of 24 hour TV news in the mid 80's that we have now, but there was plenty of coverage of the Space Shuttle disaster. I sat in front of the television before my sister or parents came home, and I cried. And cried, and cried...
The much talked about mission would be the first time that a teacher (Christina McAuliffe) would enter space. The launch was even broadcast live in a number of schools around the country, mostly because of McAuliffe. Seventy-three seconds after lift off, an O-ring failure in the right solid rocket booster caused the shuttle to disintigrate. The accident grounded NASA's shuttle program for thirty-two months (I won't go into more detail, you can read about it all over the internet).
I had always been fascinated by science, but space in particular really captured my imagination. I know that sci-fi movies like Star Wars were part of this fascination (the title of this blog is a quote from Darth Vader...yes, I'm that dork), but NASA played a big role as well. I dreamed every night of one day becoming an astronaut and traveling into space on some grand adventure (of course I could never be bothered to apply myself in school enough to reach this dream). The news of the accident devastated me.
Tomorrow is the 25th anniversary of "that day". I am still fascinated by science, and frequently look through a telescope into the night sky. I follow the discovery of new planets and galaxies on the internet (not really cool enough for televised news anymore for some reason) and have passed that love on to my son. He sometimes talks about going into space "when he grows up". When he talks about it, I can feel a big smile come across my face. And my eyes get a little misty as I remember the Challenger Mission. I will never forget it.
Posted by Joe at 1:22 PM 1 comment:

I, the Unblessed Grocery Guy 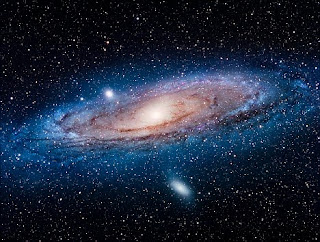 Our galaxy, the Milky Way, is on a collision course with a neighboring galaxy called Andromeda. Andromeda is closing in on us at about 140 kilometers per second. Of course, Andromeda is also 2.5 million light years away, so the collision will not happen until approximately 4.5 billion years from now. I like the thought of such an event, because it serves as a reminder of how small and insignificant we are in relationship to the universe (of course, it helps that I'll be long gone and long forgotten when it happens). We're not special. In the 90's, Voyager I took a picture of the Earth from over 6 billion kilometers away. We were no more than a pale, fuzzy blue dot (Carl Sagan wrote a book about it). A lot of really smart people are studying and have been studying the universe and its origins for a long time. They have theories (a lot of which are really cool...check out the theory of Fecund Universes) but they don't know. And that's okay. The fact that so many of our questions have answers outside of our reach just helps us to remember that we should be humble. I work in a grocery store for goodness sakes! What do I know! I call myself an atheist and I'm not even sure what that really means. Sam Harris (neuroscientist and atheist) once said, "In fact, "atheism" is a term that should not even exist. No one ever needs to identify himself as a "non-astrologer" or a "non-alchemist". We don't have words for people who doubt that Elvis is still alive or that aliens have traversed the galaxy only to molest ranchers and their cattle. Atheism is nothing more than the noises reasonable people make in the presence of unjustified religious beliefs." This is the basis for my atheism. I don't know, and neither do you. I just choose not to put any weight in the holy books that were written thousands of years ago by men. In the bible (John, chapter 20, verse 29) it says, "Jesus saith unto him, Thomas, because thou hast seen Me, thou hast believed: blessed are they that have not seen, and yet have believed." I have absolutely NO interest in being blessed (but don't judge people for wanting to be). But I'm perfectly fine with being judged by my beliefs (or lack of beliefs), I'm actually very proud of it.
Posted by Joe at 4:12 PM 1 comment:

What comes first? The opinion or the facts. 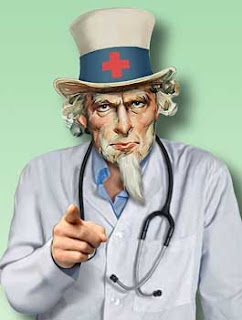 I have opinions. I'd like to believe that most of them are based on facts (I'm sure that some aren't). Often when we have already decided what our opinion on a certain topic is, we interpret any information we find exactly how we want so that it jives with our preconceived notions. I call this faith (or, the absence of logic and reason). I recently got bogged down in a "debate" online about healthcare in the United States. Life expectancy (or should I say, our supposed poor ranking with regards to life expectancy vs. other industrial nations) was used as a rationale for government intervention in the healthcare game. I have decided that two "rules" should be followed before someone uses this "statistic" as the reason we need Uncle Sam's health insurance. First, please stop using Cuba's statistics for anything. Are we to believe any information that comes out of that place. Come on!!! Second, make sure you understand how these so called rankings were given and by whom. I'm gonna be lazy for the rest of this post and share an article that I think properly dissects the WHO (World Health Organization) and OECD (Organization for Economic Cooperation and Development) life expectancy rankings (they don't rank us very high). It doesn't even mention the fact that Americans eat more and participate in less physical labor than most, if not all of the other countries listed. These are personal lifestyle choices that the government has no business attempting to regulate. Our healthcare in America is far from perfect. But the government has a very short list of things it does well. It takes an unreasonable amount of faith to believe that providing health coverage would make that list.
I am sorry I haven't posted for a week or so, but be honest...are you really waiting in high anticipation for my blog posts. Unlikely. Anyway, for your consideration.....
Inaccurate Grounds for Calling U.S. Health Care Inferior
Critics of the U.S. health care system frequently maintain that other countries have superior health care we should use as models for U.S. reform. They argue that many countries spend far less on health care than the United States yet seem to enjoy better health outcomes.
However, these claims fall apart upon careful examination. Compared to the rest of the world, the U.S. has top-tier survival rates, choice of providers, and very short wait times. It turns out that the statistics critics cite either are incomplete or compare apples to oranges.
WHO Rankings. Critics frequently quote the World Health Report 2000, prepared by the World Health Organization (WHO), in whose performance rankings of 191 nations' health care systems the U.S. disappointingly ranked 37th. You'd assume these WHO rankings would reflect how likely you were to survive an illness or injury, or to live better and longer with a chronic condition. However, the WHO rankings give great weight to whether the evaluated health care system meets the organization's ideological preferences.
The U.S. is penalized for things like allowing Health Savings accounts, not having a government-run health care system, and having an insufficiently progressive income tax system (i.e., escalating rates on increasing levels of earnings).The low U.S. grades on these overcome its advantage on the statistics that directly measure health outcomes, where WHO rates our country number one.
Life Expectancy. Another frequently cited statistic is that according to the Organization for Economic Co-operation and Development, the U.S. ranks 18th among 30 world democracies in life expectancy. However, health care is not the only factor in life expectancy. If you correct for two causes of death not directly related to health carehomicides and automobile accidentsthe U.S. actually rises to the top of the list for life expectancy.
Infant Mortality. The UN ranks the U.S. 163rd out of 195 countries in comparing infant mortality rates. However, in measuring these rates, the U.S. includes all deaths after "live birth" and defines births as live if newborns show any sign of life, regardless of prematurity. By contrast, Austria and Germany include only deaths of infants who weigh at least one pound at birth. In Belgium and France, the deaths of infants born after less than 26 weeks of pregnancy are not included. Moreover, many other countries do not reliably register babies who die soon after birth.
Specific Diseases. When you compare the outcomes for specific diseases, the U.S. clearly outperforms the rest of the world. According to the U.S. National Cancer Institute and the International Agency for Research on Cancer, five-year survival rates for all of the five most common types of cancer are better in the U.S. than in European countries.
Medical Innovation. Moreover, the U.S. drives the bulk of worldwide research and innovation related to health care. A study by Michael Tanner concludes, "Eighteen of the last 25 winners of the Nobel Prize in Medicine are either U.S. citizens or individuals working here. U.S. companies have developed half of all new major medicines introduced worldwide over the past 20 years. In fact, Americans played a key role in 80 percent of the most important medical advances of the past 30 years. ... [A]dvanced medical technology is far more available in the United States than in nearly any other country."
Even under the WHO rankings, the U.S. is rated first in "responsiveness to patients' needs in choice of provider, dignity, autonomy, timely care, and confidentiality." Despite genuine problems of distribution and utilization of preventive care, overall, in comparison with other countries U.S. health care is faster, more effective, and more advanced.
Posted by Joe at 4:36 PM 1 comment: